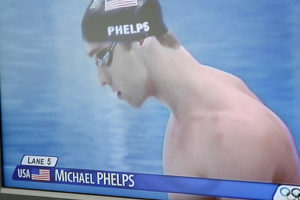 A friend replied to me regarding Phelps with the argument that he has more opportunities to win medals; and while he does not really care for him, he does respect his accomplishments. That got me thinking…

Most people (no one else!) are physically unable to qualify for 6 (or in the case of Beijing 8) races in one games. Phelps does not just qualify, he wins!

Imagine if Usain Bolt ran the 100, 200, 400, 800, 100 hurdles, 400 hurdles, and two relays in the same games. Ridiculous. Anyone has the opportunity, but physically being able to go through that watery-meat grinder is a different story. Remember, for every final you watch, there was a qualifying heat to get there.

Phelps has done it over the course of 20 years! A swimmer staying elite, not just elite in terms of making it through trials for 20 years (if you make the US Olympic swim team you are an elite swimmer), but being essentially the overall best swimmer in the world for 18 of those 20 is simply absurd. It is just not done.

Every Olympics he has had rivals that challenge him, even beaten him, but four years later, they are gone, Phelps is still there and has been since 2000.

To put it in perspective, Ian Thorpe is an Aussie legend (5 Olympic golds and 8 Olympic medals total). Thorpe first beat Phelps in Sydney, when Phelps was 15, and he was 17; by the time Beijing rolled around Thorpe had been essentially retired for a couple years, and Phelps was winning eight golds. EIGHT GOLDS!  Two of them in the most physically demanding disciplines: the 100 and 200 fly; and the individual IM! Then, he comes back four years later and wins four more golds in London!

Yet, only someone who has been a competitive swimmer or follows swimming can even begin to wrap their head around what he has done, and continues to do.  To respect Phelp’s accomplishments is to disrespect his body of work; you should be in awe of him as you would a force of nature. For that reason, he is the greatest individual athlete in modern history at his particular sport; the only other person who comes close is Jack Nicklaus in golf and Tiger was getting close before he imploded. He is what Tiger might have been.

No one is getting close to Phelps. Phelps is a more dominant swimmer than Ali was a boxer. More dominant in his sport than Sergei Bubka. Serena. Roger. You name it. However, because of the place swimming holds as a sport in our country and culture, he is also the most underrated individual athlete in the history of our country, not in the swimming world, but in terms of the general public, the average sports fan, and the sporting press.

Keep this in mind tonight when you watch Phelps. Force your children to watch with you, for you nor they will never see the likes of him again.

Even if he doesn’t win, even if he is beaten by the younger men who idolized him growing up, men who will climb on the blocks tonight because he inspired them to take up the sport, and in the case of LeClos and Kasuke, he is the reason they chose to swim butterfly in the first place.

Know that merely respecting him is disrespectful. He is Einstein. DaVinci. Hawking. Picasso . El Capitan. Merckx. Bannister. In terms of swimming he is as big as Everest and meaner than the Matterhorn . He is all that even if he loses tonight. More from Rio coming soon… 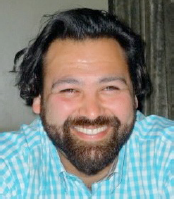 From Shuttle launches at Cape Canaveral, natural disasters, historic elections, Super Bowls, The Olympics, a World Cup to a royal wedding across the pond; Julian brings his global experience and understanding for the latest technologies and trends to Mad Bear’s clientele.